SPLM swears in Lam Both as Secretary-General 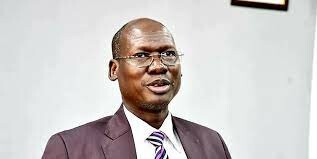 The Sudan People's Liberation Movement (SPLM) swore in Peter Lam Both as its Secretary General on Tuesday.

Lam was appointed Secretary General last month but since his appointment, he fell ill and sought treatment in Germany. He arrived back in the country last week.

Speaking during the swearing-in ceremony President Salva Kiir, SPLM's chairman, called for party cohesion and said the ruling party must also embark on the delivery of services to the people of South Sudan.

"I also want to emphasize the internal cohesion of the party," he said. “Now we have liberated South Sudan but we must develop it. It was not only to fight for liberation but we must develop South Sudan. Development starts with roads. I went to Bor on Saturday the people who used to travel to Bor all this time you know how difficult it was but it only took us less than two hours.”

The national minister of public service and party member Bangasi Joseph Bakasoro called on the Secretary-General to institute reforms in the party.

“My humble advice to you Comrade Peter is that be an independent and energetic driver of the SPLM party to the next level, and do the necessary reforms otherwise circumstances will force SPLM to reform," he said. "As we enter another phase of the implementation of the peace agreement, the SPLM should organize and drum up support for the chairman Salva Kiir as party chairman and as flag bearer in the upcoming election.”

He stressed that the party chairman requires the support of members in ensuring SPLM wins the coming elections.

“We should reform the structures of the party at all levels and strategize on how to win the support of our South Sudanese people to realize the success of the party during the upcoming election,” Bakasoro said.

For his part, Peter Lam Both said he will focus on mobilizing resources for the party.

“We must focus on resource mobilization for the party. There is a saying that you cannot eat what is not there. So, we are to mobilize resources. We need to set up the National Liberation Council (NLC) and Political Bureau committees to initiate policies for development and supervise the government during their implementation," Lam said. "We need to improve our economy because without working on our economy, we cannot progress as a country."

He further stressed that the SPLM will redefine its foreign policy as the country prepares for elections come 2024, saying it will only work with 'true allies' in this period.

"Some international actors are still pursuing the regime change agenda of 2013. For that reason, any progress in the implementation of the agreement is never good enough and goalposts keep shifting. Our laws are being written for us instead of by us," Lam said.

"The SPLM must therefore define its international orientation. The world today is a dangerous place and it is even more dangerous if we have not defined our true allies who can stand with us as we enter the election season," he declared.

SPLM SG Lam Both returns to Juba after treatment in Germany

SPLM SG Lam Both in Germany for treatment